Modawake 200 mg, sometimes known as the ‘limitless’ pill is a popular and trusted cognitive enhancer. It contains the drug modafinil which functions to improve the user’s wakefulness, focus, and alertness to improve their performance – mental and also, therefore, physical. All the research done on the performance of this drug says that it somehow tends to change how our brain and the body perceive tiredness. Most physicians recommend the administration of Modawake during the early morning since its effects last for as long as 12 hours and even longer durations possibly. So, to avoid its interference with your general sleep cycle, taking it at least 12 hours before bedtime is the best course of action to go for. Sticking to the doctor’s advice is important to avoid any mishaps.

How does Modawake 200 mg work?

Modawake 200 mg is a cognitive enhancer, containing the drug modafinil, that works by changing our brain’s perception of tiredness. This affects how our body functions throughout the day and thus the drug helps enhance our focus and alertness even in the later parts of the day.

To put it simply, Modawake is a trustworthy solution for people complaining about a decrease in productivity. All it does is improve productivity by letting you stay awake for longer hours than before. As it is, this smart drug, prescribed to anyone with too much weight on their shoulders and with too little time, is the perfect fit if you’re looking for:

Modawake is among the most reassuring and successful smart drugs in the world today. Also known to be a study drug, it is used for the treatment of excessive sleepiness which may be caused as a result of one or both of these:

Other than that, this drug is also often prescribed for use along with other treatments, including a variety of breathing devices, to prevent the excessive sleepiness that is caused as a result of obstructive sleep apnoea/hypopnea syndrome (OSAHS). This is a sleep disorder in which the one suffering with it briefly stops breathing or their breath very often becomes shallow during sleep. In either of the cases, the patient doesn’t get the required amount of sleep.

Modawake is included in a group of drugs that are categorized as wakefulness-promoting agents. Such drugs work by changing the amounts of some of the natural substances that are present in the area of the brain controlling sleep and related activities.

Its most commonly available dose is the 200 mg one. However, there are other available doses too, which include 50 mg and 100 mg. Modawake 50 mg is prescribed for use as a microdose, and the effective hours for the drug tend to vary based on the dose. As it is, Modawake 200 mg has been understood to produce over 12 hours of effectiveness after about an hour of its administration.

It is advised not to take Modawake at any time other than early in the morning, since taking it at a later time in the day can induce insomnia. Taking it in the morning is the best choice since it allows the drug an ample amount of time to begin affecting and, therefore, to produce its ideal results. It also helps us to avoid any interference that might cause our sleep cycle on being administered at a later time.

When using Modawake for non-medical purposes, it is best not to take it daily since that might lead your body to experience a sort of tolerance for the drug. This also leads to a change in how the body responds to its presence at different times in the future. Taking it daily or in an unregulated manner also means that the normal functioning of the drug might get affected and, at a later time, a higher dose will become a necessity. As a consequence, it is recommended to take Modawake 200 mg only up to three times a week and to report to your doctor regarding any unusual changes and experiences.

Because of it being very peculiarly timed, it’s advised that on missing a dose of Modawake 200 mg, the best thing to do is to not take it at a different time on the very day. It’s better to postpone the dose to the next day.

Like just about everything else around us, an overdose of Modawake too can be lethal, with some of the symptoms being:

And, then, as a result of an overdose, or even in combination with other drugs, Modawake has been understood to cause death.

For this reason and others, it is advised that you stay in contact with the prescribing doctor, who’d accordingly decide any change of doses for you.

Other than that, it is also advised that your doctor be informed about your current and past medical conditions before using this drug. Let them know if you are to have surgery, which drugs you’ve been on before if you have a peculiar condition and other such terms about yourself.

Side effects of Modawake 200 mg

In the initial stages of your body’s getting used to the drug, it happens that the response isn’t too great or at least not as great as you’d like. These changes include:

With time, however, these side effects actually do go away. Moreover, these are all treatable, begin with increasing your daily water intake and having a proper sleep schedule. Some of the aforementioned side effects are more particularly the effects of lack of rest. So, once your body gets used to Modawake 200 mg and your sleep schedule is accordingly handled on a regular basis, those are sure to disappear.

Just in case any side effects still persist, say insomnia or trouble sleeping, talk to your doctor immediately and let them know about all the changes and issues.

Modawake has also been observed in association with several other drugs and it has been understood that some can enhance its effects on the human body, whereas there are others that affect in an otherwise manner. Some changes can be observed as a result of its interactions with some of the following:

It’s important that you store Modawake tablets in a safe and accessible place to avoid misuse and also to keep it reasonably effective for longer durations. As it is, leaving the package uncared for tends to determine how the medicine affects you since it brings about changes in the composition and that might alter the expected results. Follow these steps for the safekeeping:

Ans. Since the drug modafinil that’s present in Modawake kicks in around 45 minutes, with effects lasting for around 12 hours, it’s good to take it early in the morning.

2. Will Modawake help you study?

Ans. Modafinil is known to be among the best study drugs in the world because of the sheer amount of focus and concentration it provides us. Therefore, taking the smart drug, Modawake 200 mg, will certainly help with improved cognition and better focus.

Ans. These tablets can be taken with water or with food. However, taking it with water guarantees a more swift effect than when it is taken with food when it can take over an hour to show results.

There are no reviews yet.

Be the first to review “Modawake 200 mg” Cancel reply 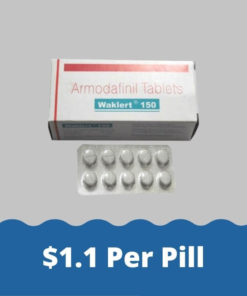 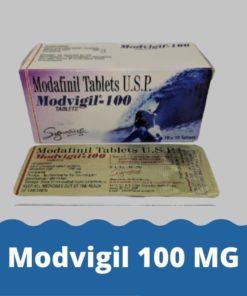 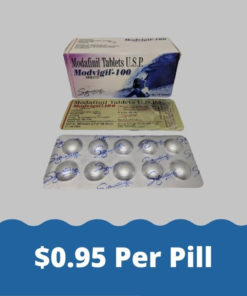 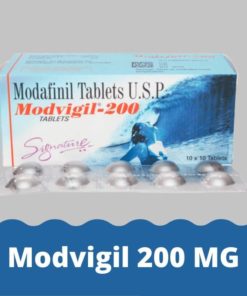 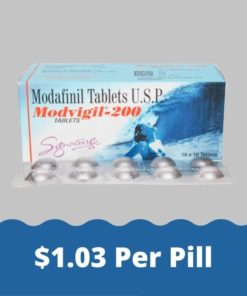 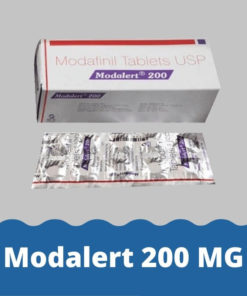 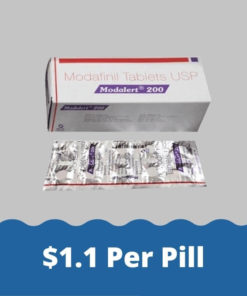